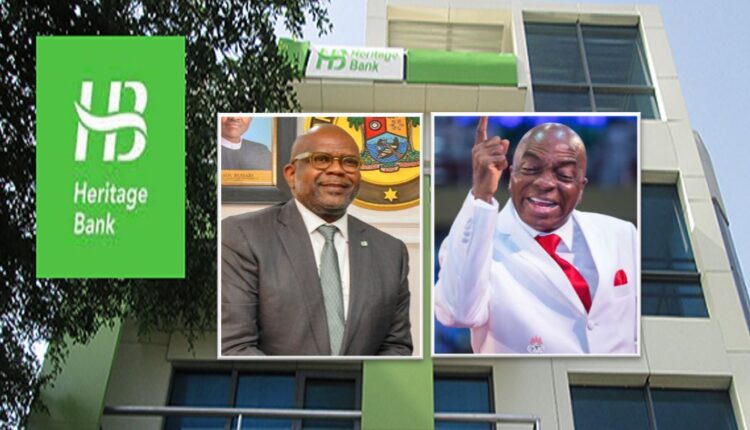 Things have continued to fall apart for Heritage Bank Limited, owned by Nigerian banker, Mr. Ifie Sekibo, as the fortunes of the bank have continued to dwindle over liquidation issues, lack of proper management amidst financial improprieties.

Recall that Sekibo, who is the founder and pioneer managing director/CEO of the bank, had served out his 10-year tenure in September 2022. Customers, stakeholders and business analysts have however described Sekibo’s performance as poor and uninspiring as he failed to steer the bank out of troubled waters.

Many had wondered why Nigeria’s banking regulator, the Central Bank of Nigeria (CBN) has not wielded its hammer on the bank despite its troubled and distressed state. The questions on the lips of stakeholders is if the new helmsman, Akinola George-Taylor, could revive the moribund bank.

Fresh information has, however, revealed that Heritage Bank, which came into existence under a new name just a few years ago has continued to sink deeper while its customers have continued to lament over their inability to withdraw or transfer their deposits due to lack of funds.

Most notable amongst the customers is Living Faith Church Worldwide, popularly known as Winners Chapel owned by fiery preacher, Bishop David Oyedepo. This online newspaper reliably gathered that worried by recent negative developments in the bank, Bishop Oyedepo had directed that the entire funds of the church in the bank worth over N5 billion be moved to another bank. Surprisingly, for weeks now, Heritage Bank has not been able to implement the instruction for lack of funds.

“For over two weeks now, Bishop directed that the entire church money in Heritage Bank worth over N5 billion be moved to another bank, but Heritage Bank has failed to honour the instruction. After much gimmicks, two of the bank’s directors came begging that they don’t have enough funds. We knew that the bank is distressed and that was why we took the step,” a close source told our correspondent.

The source further disclosed that Bishop Oyedepo has threatened to write the CBN over the development if his request was not met before the end of the week.

Further digs reveal that apart from the issues of “Capital Adequacy Ratio (CAR) and the Liquidity Ratio (LR), the commercial bank is also grappling with many other crises that tend to threaten its survival. One of them is its poor services which are staring its customers in the face. Already, most of its branches are awash with complaints of unsatisfied customers whose singsong is their plans to close their accounts due to long hours they experience to get services from Heritage Bank staff.

Some of the staff who spoke on condition of anonymity told our correspondent that people are resigning every day because of uncertainties showing up in every of its departments.

“The remuneration of Heritage Bank is very poor. Our salaries have been drastically reduced in recent times with the management citing the poor economy while allowances have completely been discontinued,” the staff said.

On the other hand, Heritage Bank and its founder, Sekibo’s many battles with the Economic and Financial Crimes Commission (EFCC) over alleged several undercutting and fraudulent dealings may also be the reason the institution is failing.

Recall that the EFCC had charged Sekibo and five others before a Lagos State high court in Ikeja for an alleged fraud of N1 billion. Sekibo was charged along with Dimire Dike, Wumi Adeniyi, Kolapo Daisi, Funmilayo Taiwo and Akeem Durotoye. The charges bordered, among others, on conspiracy, stealing, obtaining money under false pretenses and forgery.

The EFCC alleged that the defendants obtained the sum of N1bn from Heritage Bank Plc “by falsely re-presenting the sum as proceeds of Vlamings Professional Limited’s investment in Heritage Bank Plc.”

It accused them of dishonestly converting the N1bn, being Heritage Bank’s property, to their own. They were also accused of forging a document titled ‘RE: Expression of Interest in Agric Fund Management Scheme.”

According to the anti-graft agency, the defendants allegedly forged the document dated April 2, 2015, “purporting it to be a loan scheme executed in favour of Vlamings Professionals Limited.”
The EFCC claimed that the defendants sent the document to it (EFCC), hoping it would be mistaken as genuine.

They also allegedly forged another document titled, “Agric Management Scheme” purporting that it was approved by Heritage Bank Plc.

Similarly, in a separate allegation, the EFCC again charged Mr. Sekibo before another Federal High Court in Lagos for an alleged fraud of N605,321,051.05.

Joined with Sekibo in the charge sheet marked FHC/C/95C/18 was one Kolapo Kola Daisi and company, Greame Properties Limited.

Still grappling with the effects of these allegations, news broke again of Sekibo’s involvement in an alleged diversion of N13 billion belonging to the Oyo State government. According to reports credited to a source in the EFCC, the money was lodged in some secret accounts in the Heritage Bank in connivance with some top state government officials.

The money was said to have been deposited in a secret fixed account with an agreement to share the accrued interest among them.’

It was alleged that about N180 million was traced to Sekibo, while another N85 million was kept in a fixed deposit account on behalf of some top bank officials.

The troubles of Heritage Bank however escalated when it was discovered that a whopping $24.1 million (N9.399 billion) belonging to the Nigerian Ports Authority (NPA) which was lodged with the bank was kept away from the then management of the maritime agency led by Hadiza Bala Usman. Even after the NPA opened discussions with the bank in a bid to recover its money, it was gathered that the management of Heritage Bank feigned ignorance of such lodgment, claiming rather that the money might have been an inherited liability from Enterprise Bank which it acquired recently.

Reports have it that Heritage Bank management, while admitting to hiding the sum, declared that should the money be moved from the bank, it would automatically lead to the collapse of the lender.

Will Heritage Bank survive the CBN hammer? Time will tell.

Heritage Bank officials did not respond to our inquiries as at press time.