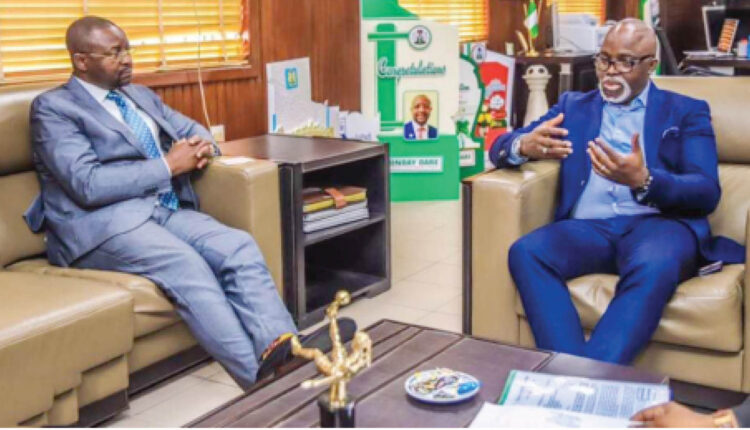 The minister made the disclosure , when presenting the report of the 10 years national football development plan committee at the presidential villa, he revealed that the amount were allegedly released to NFF through appropriation provisions and special interventions.

Presidential spokesman, Femi Adesina quoted the Sports Minister saying that the “ Buhari administration has disbursed over N15 billion to NFF through budgetary appropriations and Presidential interventions in the last seven years.

Dare is reported to have described the 10-year Masterplan, which took the Ibrahim Galadima led 16-member Committee six months to prepare, as ”a world class document.”

The Minister added that the submitted plan ,if sttricly complied with will resolve the major issues bordering on the domestication of Nigerian laws, NFF Statutes in line with FIFA Statutes to create space for harmonious relationships in the football value chain of Nigeria.

“The Masterplan is envisioned to encapsulate functional strategies that would outlast the current administration and firmly place Nigerian football on the path to sustainable growth and development.

“Mr. President, with your approval, this document will be presented to the Federal Executive Council for approval and future funding, so that the implementation of the short, medium and long term plans can commence as part of the legacies of this administration.

“Thereafter, this document will be handed over to our football administrators, that is the Nigeria Football Federation, NFF, who shall be expected to implement key elements of these reports in stages.”

Adesina said: “Dare pledged that the Ministry will monitor the faithful implementation of the Masterplan to ensure that attention is paid to the business opportunities along the value chain, governance structure, standardisation, and prioritisation of the welfare of footballers, education and awareness.

“Dare also told the President that one of the most important aspects of the Committee’s work is the legal regime around football in Nigeria; and the Masterplan made some far reaching recommendations on laws and statutes governing the administration of football.

“He added that subject to the final decision of the NFF Congress, the Masterplan made recommendations for the expansion of the constituents for the NFF Elective Congress and Executive Board to 111 and 16 respectively, in order to meet new realities and needs.

Court slams Sterling Bank, others with N841m in damages for unlawful sealing

Wike meets Tinubu in France, may work against Atiku –Report