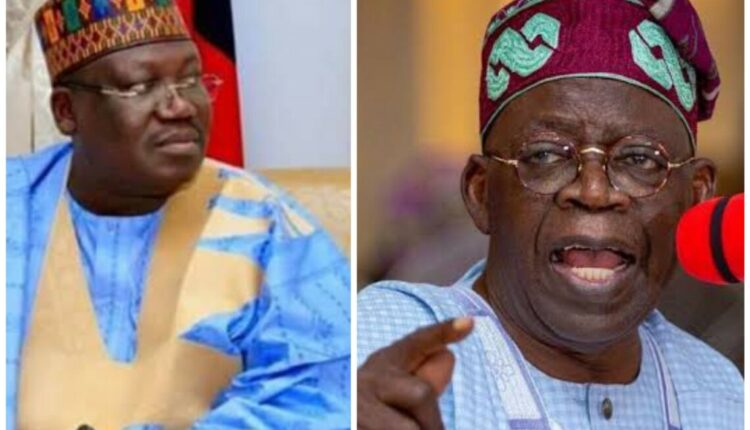 Bola Ahmed Tinubu, former Lagos State governor and winner of the All Progressives Congress (APC) presidential primary, on Wednesday, slammed Ahmad Lawan, senate president and presidential aspirant for contesting against him in the election.

Tinubu in his address after he was pronounced winner of the primary by Atiku Bagudu, governor of Kebbi State, said he would have been upset that Lawan contested against him but that there was no longer any need since he’s now licking his wounds.

“I would have been a little upset that you chose to run against me, but there is no longer any need because I leave you to lick your wounds,” Tinubu said.

Tinubu was instrumental to the emergence of Lawan as senate president in 2019, succeeding in his push the second time after Abubakar Bukola Saraki emerged ahead of Lawan in 2015.

The ex-governor polled 1, 271 votes to defeat Amaechi who had 316 votes; Osinbajo took third position with 235 votes while Ahmad Lawan came fourth with 152 votes.

A total number of 2, 203 accredited delegates voted at the election.

After several back and forth that included a rowdy accreditation process, proceedings got under way towards 8 pm on Tuesday.

Subsequently, aspirants were asked to make speeches and in a remarkable turn of events, seven aspirants announced that they were stepping down for Tinubu.

Others were Dimeji Bankole, former speaker of the House of Representatives and Uju Ken Ohanenye, the only female aspirant in the mix.

The result brings an end to what has been weeks of drama and intrigues that saw Adamu Abdullahi, national chairman of the party first announcing to the National Working Committee (NWC) members that Ahmad Lawan had been chosen as consensus candidate.

The announcement followed series of meetings at the State House, Abuja, the party’s national secretariat and other locations in a plot to foist Lawan.

But it collapsed like a pack of cards, as the declaration of Lawan as consensus candidate was rebuffed by the northern governors who insisted on their earlier position that power must shift to the southern part of the country.

The northern APC governors who had declared their support for power shift to the south, moved swiftly to meet President Muhammadu Buhari who told them he had not endorsed any aspirant.

The governors later issued a statement restating their commitment to power shift to the south.

They subsequently drew up a list of five aspirants, including Tinubu, Amaechi, Osinbajo, Fayemi and David Umahi, governor of Ebonyi State for Buhari to choose from. The move was, however, opposed by seven aspirants.

In the end the party decided to throw the contest open, and as proceedings began, as much as seven aspirants stood down for Tinubu, which was a clear indication of what was to come.

Tinubu, having emerged victorious on the night, will face Atiku Abubakar, candidate of the main opposition party, the People’s Democratic Party (PDP) in what promises to be a breathtaking contest for the presidency in 2023.

Also in the contest is Mr. Peter Obi, former Anambra State governor who clinched the Labour Party ticket after leaving the PDP.

Obi who was the running mate of Atiku in 2019 election is popular among the youth population who are agitating for a new political order, but it remains to be seen whether he can match the two leading candidates of the ruling party and the main opposition party.