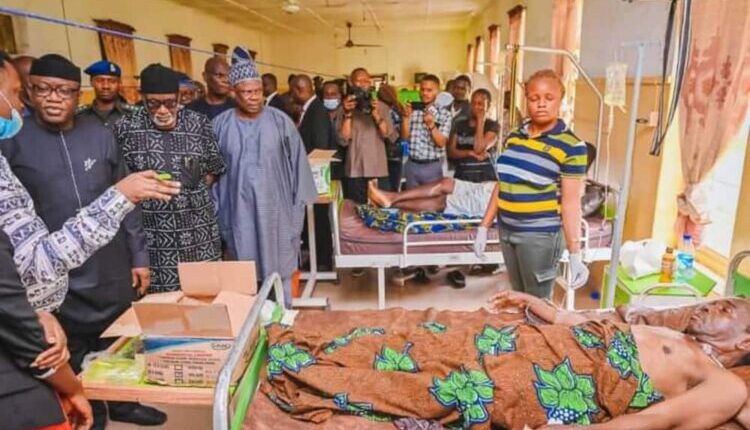 Akeredolu said 40 persons died in the attack while 61 persons were hospitalised for gunshot injuries.

Akeredolu said 26 persons have been treated and discharged.

He said a total of 127 persons were inside the church when the gunmen stormed the church.

The Ondo Governor spoke when he played host to a team of Catholic Bishops from the South-West led by Most Reverend Leke Abegunrin at his Ijebu-Owo residence in Owo.

Akeredolu, who assured that land would be provided at a good environment for mass burial of the victims of the Owo terror attack, admitted that the figures earlier released were wrong.

He explained that the new figure followed the harmonization of the reports from the various hospitals where victims were rushed to.

explained that the State Government set up an account for donations following demand for an account number by well meaning individuals who are desirous of helping the families of the victims and the survivors.

According to him: “What we witnessed in Owo on that Sunday, I have been looking for a word to describe it but I’m not too sure I can find one because it is indescribable. There is no word to describe it. If you say horrific, dastardly, horrendous, all those ones are common words and we use them for many things.

” We will have a Memorial Park here where those who died in the attack will be buried. We will find a good place as a Memorial Park. It will also be my suggestion that even if there are people who have retrieved their family or members of their family, we must still have a symbolic grave there for them. And it will be there forever, it is not something we can forget and we should never forget it.”

“The figure I have now shows that 127 persons were involved, and that the number of death now is 40. On admission receiving treatment we have 61. 26 have been discharged. Those are the figures we have now. So, government is not hiding anything.”

Bishop Abegunrin described the attack as an attack on God.

“We were saddened when watching on our small phones and later in the evening the whole episode as it was on the public television, it was really sad. The Bishop of Yoruba land in Lagos and Ibadan province are here to commiserate with you, Owo people, the people of Ondo State and with our brothers and sisters in the Catholic Church and Ondo Diocese.

“It is very painful, it can provoke people to retaliate and do what is ungodly but we are people of faith; we leave everything to God to judge.

“They attack human beings, but our own interpretation is that they attack God and the consequences are awaiting them. Whatever you have to do to bring them to book, I pray God to assist and protect you. We thank you for your action, you are not just a Governor but filled with action. You are articulate, you are not afraid. You made your place known loudly and openly that you are not for nonsense and that you are for your people and Nigeria,” the Bishop said.