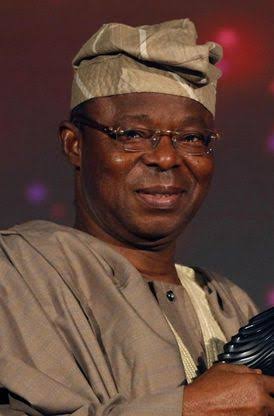 The appointment of Gbenga Shobo as the new managing director of FirstBank of Nigeria Limited has triggered controversy.

He was the lender’s deputy managing director.

He is expected to take over leadership from Adesola Adeduntan, who will be retiring in accordance with the bank’s term limits for chief executives, having headed it since 2016.

This has, however, sparked controversy as the Central Bank of Nigeria raises eyebrows that due consultations were not done before the new appointment was made.

The CBN in a letter addressed to the chairman of First Bank, Ibukun Awosika said the banks did not allow Mr Adeduntan tenure to end before making a new appointment.

“The CBN notes with concern that the action was taken without due consultation with the regulatory authorities, especially given the systemic importance of First Bank Ltd. Given that the tenure of Dr. Adeduntan is yet to expire and the CBN was not made aware of any report from the Board indicting the Managing Director of any wrongdoing or misconduct, there appears to be no apparent justification for the precipitate removal.

“We are particularly concerned because the action is coming at a time the CBN has provided various regulatory forbearances and liquidity support to reposition the bank which has enhanced its asset quality, capital adequacy, and liquidity ratios amongst other prudential indicators. It is also curious to observe that the sudden removal of the MD/CEO was done about eight months to the expiry of his second tenure which is due on December 31, 2021.

“The removal of a sitting MD/CEO of a systemically important bank that has been under regulatory forbearance for 5 to 6 years without prior consultation and justifiable basis has dire implications for the bank and also portends significant risks to the stability of the financial system.

“In light of the foregoing, you are required to explain why disciplinary action should not be taken against the Board for hastily removing the MD/CEO and failing to give prior notice to the CBN before announcing the management change in the media.

“In the meantime, you are directed to desist forthwith from making any further public/media comments on the matter. Your comprehensive response on the foregoing should reach the Director, Banking Supervision Department on or before 5pm on April 29, 2021,” a letter signed by  Haruna B. Mustafa, Director of Banking Supervision for CBN read.

In another development, this newspaper obtained a letter where the CBN claimed that the bank has not complied with regulatory directives to divest its interest in HoneyWell Flour Mills despite several reminders.

“We further noted that after 4 years the bank is yet to perfect its lien on the shares of Mr. Oba Otudeko in FBN Holdco which collateralized the restructured credit facilities for Honey Well Flour Mills contrary to the conditions precedent for the restructuring of the company’s credit facility. 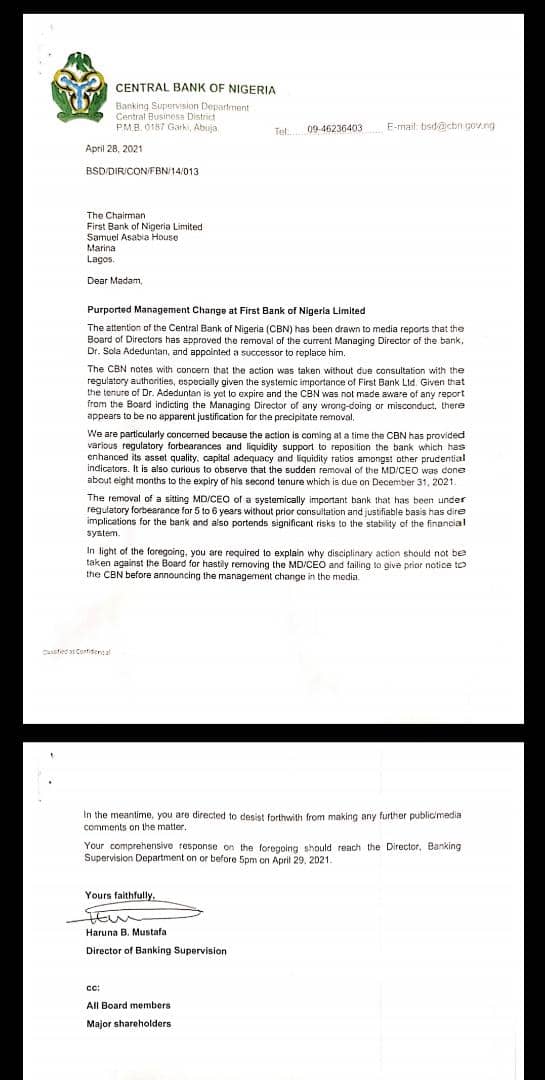 “Given the bank’s failure to perfect the pledge and satisfy conditions for regulatory approval, the restructuring has thus been invalidated and the credit facilities now payable immediately.

“Consequently, the company is required to fully repay its obligations to the bank within 48 hours failing which the CBN will take appropriate regulatory measures against the insider borrower and the bank.

“Furthermore, the Bank notes the untenable delay in resolving the long outstanding divestment from Bharti Airtel Nigeria Ltd in line with extant regulations of the CBN.

“Accordingly, you are required to divest the equity investments in all non-permissible entities such as Honey Well Flour Mills and Bharti Airtel Nigeria Ltd within 90 days. Please you are to forward evidence of compliance in accordance with the timelines above to the Director of Banking Supervision.”

Despite headwinds, Zenith Bank’s profit after tax rises by…