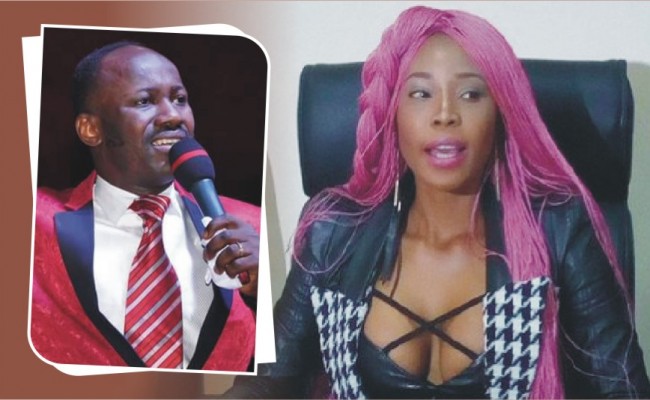 Suleiman, founder of OFM, has been in a running battle with Davids over the latter’s allegation that he slept with his wife.

In the latest instalment in their war of words, David countered Suleiman’s claim that he doctored an audio recording where his former principal could be heard threatening his life.

Suleiman had agreed that the voice in the recording was his, but said it was from a conversation he had with a young lady three years ago.

Responding to the clergyman’s comment, Davids shared a video on his Instagram page on Sunday, where he said: “The audio I released is the original audio and Apostle Johnson Suleman knows that the one he released is doctored, fake, manipulated. Don’t forget that I was part of that system for 16 years.

“That you sent me out of OFM for reasons of blackmailing pastors, I want everyone to know that it is a lie. I left that ministry of my own freely because I was tired of your ungodliness as a leader.”

Commenting on the issue of the Canada-based singer who claimed to have had an affair with Suleman, he said: “We all know the part I played in Stephanie Otobo saga. You knew how we got Stephanie to come to the altar and apologise to Mama.

“I’m coming to that issue because you are pushing me really hard. Because I’m sure that the world and Nigerians will be interested to know how Stephanie eventually came to Auchi to make that confession the day she actually did.”

He also gave Suleman 48 hours ultimatum to order the unfreezing of his accounts or face the consequences.

“Thirdly, you are supposed to be a man of God… and I don’t know why they will have my accounts freezed so that I will have no access to funds. I want everyone around the world to be aware of what is going on,” Davids said.

“Presently as I speak to you my account has been freezed. You have 48 hours to instruct those who are behind the blocking of my bank account to undo whatever they have done. If they don’t, you won’t like what is going to follow. Don’t say I didn’t give you this warning.”