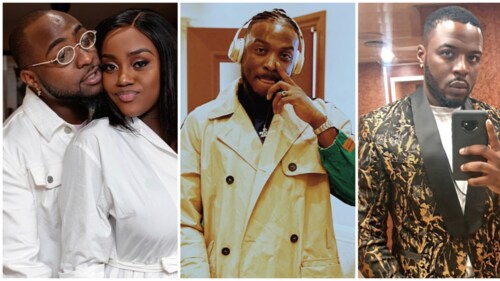 It all started after record label owner King Patrick called out the singers and accused them of breaching a signed contract. Patrick stated that the matter had been in court but he only decided to bring it out in public due to the slow process of the law. He claimed that Peruzzi still had contact with him and went ahead to join forces with Davido. This was followed by the individual coming out to say that a number of hit songs credited to Davido were actually written by Peruzzi. King Patrick also dragged Davido’s babymama and wife-to-be Chioma Rowland into the drama, after claiming that she had an affair with Peruzzi and kept fooling Davido to believe that they are cousins.

Incase you missed out on all the drama, here are 5 interesting takeaway. Read below: 1 – Davido’s hit song FIA was written and sang by Peruzzi who handed it over to his boss probably after being compensated with cash. 2 – 2018 song Assurance was probably written by Peruzzi also as Twitter users have been analyzing the lyrics which share similarities with a certain post Peruzzi made in the past. 3 – Peruzzi might have dated Chioma, Davido’s baby mama and wife-to-be as claimed by King Patrick PAY ATTENTION: Get your daily relationship tips and advice on Africa Love Aid group 4 – Davido and Chioma may be going through a phase as they initially unfollowed each other on Instagram and then followed again to apparently douse the tension on social media.

5 – If it is true that Peruzzi and Chioma were once intimately involved, a paternity test needs to be carried out on baby Ifeanyi. PAY ATTENTION: NAIJ.com upgrades to Legit.ng: a letter from our Editor-in-Chief Bayo Olupohunda Meanwhile, Legit.ng previously reported that several Nigerians took to social media with mixed reactions following King Patrick’s claim that Chioma used to be Peruzzi’s former side chick, before he pimped her out to Davido.