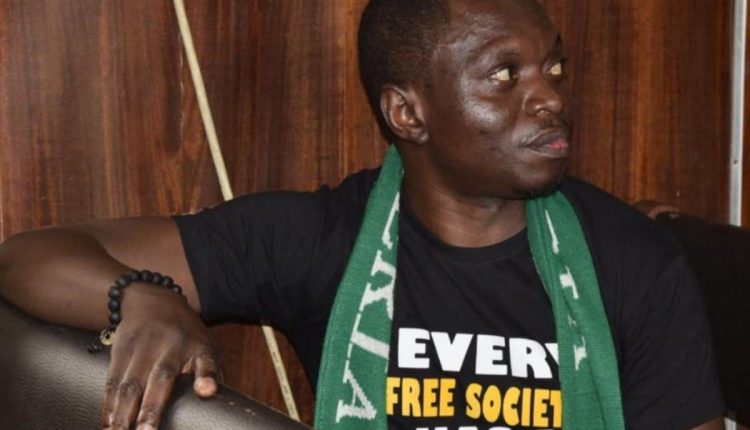 The trial of the Publisher of Crossriverwatch, Agba Jalongo, charged with terrorism, treasonable felony and attempt to topple the Cross River State government, has taken another twist. The prosecution counsel, Mr. Dennis Tarhemba who sort the order of the court that granted him leave to mask his witnesses has now turned around to ask for modification of the order.

Justice Simon Amobeda of the Calabar division of the Federal High Court had on October 23rd in a ruling granted the request of the prosecution to hide the identity of the seven witnesses listed to testify against Jalingo.

When the case, suit no FHC/CA/59/2019 was mentioned, the counsel for Jalingo, Adeyinka Olumide-fusika, a Senior Advocate of Nigeria called the attention of the court to the application filed by the defence. When he was granted leave to continue, Fusika said that the defence was relying on the ruling of the court which said the terms can be modified from time to time.

In his argument, Fusika submitted that, “In making that pronouncement, the proof of evidence which is before your lordship shows that the identity and location of witnesses number 1 to 6 are incapable of being hidden considering that they are materials already on the proof of evidence.”

He said the allegation that someone was threatened should not have been heard as there was no way a witness not known to the defence could have been threatened. The prosecution had claimed that a witness was threatened on August 28, 2019; six days into the detention of Mr. Jalingo. But, the charges were filed on August 30th a situation which Fusika argued was not possible.

He further submitted that since the prosecution had included that in their motion, “confirms that whatever mischief is intended to be prevented is already compromised by what the prosecution filed.”He asked the Court to, “therefore, use that as a basis for the order of the protection of witnesses to be reviewed especially as it is part of the process of fair hearing which is constitutionally guaranteed to the defendant.”

However, the prosecution counsel, Mr. Dennis Tarhemba objected to the application relying on section 232 subsection 2 of the Administration of Criminal Justice Act. He challenged the jurisdiction of the Court to entertain the application. Tarhemba, a Deputy Superintendent of Police relied on a 13 paragraph affidavit deposed to by one Inspector Igezuo Ibe of the Cross River Police command and a written address as part of his arguments on points of law. He said the provisions were sui generis.

He submitted that the defence cannot say that he knows the witnesses when in its further counter-affidavit dated October 22, 2019 in response to a further affidavit by the prosecution on the motion to mask witnesses, he said it had no knowledge of the witnesses.

BREAKING: Another Female Student Raped And Stabbed To Death…

Suspect linked to brutal rape and murder of Uwa Omozuwa…

He urged the Court to dismiss the application of the defendant as well as award an NGN100, 000 (USD276) as cost of transportation for the seven witnesses who had arrived the Court as the prosecution was ready to proceed.

However, Fusika quickly objected pointing out that the counsel to the prosecution had said only two witnesses were in Court when the matter was called and appearances announced. He wondered why the list suddenly increased to seven.

In his ruling, Justice Amobeda adjourned to the 12th and 21st of November 2019 for the ruling on the application and continuation of trial. The accused was however returned to prison pending the adjourned days. From our calculation, the accused has spent 41 days so far.

The accused person arrived at the Court premises in handcuffs in a green-coloured van marked “Calabar Prisons.” Decked in blue jeans, black sporting shoes and an oxblood coloured shirt with the inscription “Journalism is not a crime,”

One of Mr. Jalingo’s solicitors, Attah Ochinke, a former Attorney General and Justice Commissioner in Cross River State told journalists after the Court session that they felt “Very uncomfortable” about the masking of witnesses especially as, “the constitution of Nigeria guarantees Agba Jalingo a free and fair trial in an open court.”

Describing the alleged threat to prosecution witnesses as “dramatic,” Ochinke averred that; “the prosecution himself has already disclosed the name and identities of their various witnesses in the various court processes they filed.

But, Tarhemba stressed that by virtue of section 232 of the ACJA as well as sections 33 and 34 of the terrorism prevention and amendment act 2013, the Court had done due diligence in granting his application to “protect witnesses.”

“We (prosecution) are saying that, the Court order stands… and the Court cannot revisit any matter as per the provisions of section 232 of the administration of criminal justice Act 2015, which was interpreted by the Court of Appeal in Nigeria that it is not inconsistent with section 36 subsection 4 of the constitution of the Federal Republic of Nigeria..“The Court acted within the law and that is the simple thing. We are now arguing that the court acted within the law and that decision will stand,” Tarhemba said.

BREAKING: Another Female Student Raped And Stabbed To Death In Parents’ House In…