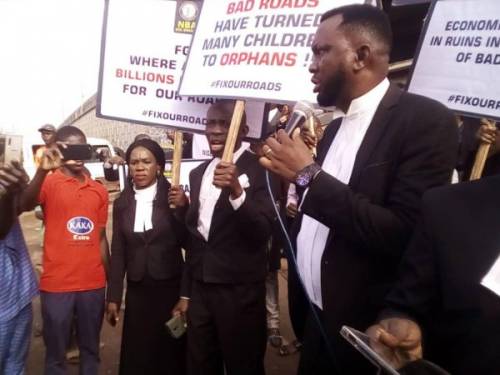 Lawyers under the umbrella of the Nigerian Bar Association (NBA) Ota branch, Ogun state, have issued a 14-day ultimatum to the federal government to repair bad roads in the state.

The lawyers, led by Isaac Ogbah, the branch chairman, on Thursday morning, deserted courtrooms to protest.

Speaking with SaharaReporters during the rally, Ogbah said Ota was an industrial hub with over 6,000 industries and as so should have good roads.

“Ota is an industrial hub with over 6,000 industries, we should have good roads, even these industries can’t produce anymore because they can’t transport anything.”

He also said lawyers in the state found it difficult to get to court on time, adding that many lives were been lost due to the bad roads.

“We had a meeting on Friday and that was where we resolved to take this action because we can’t even get to courtrooms on time anymore. So many lives have been lost already on these roads, the residents, everyone is suffering,” he lamented.

He said the group would move to the next phase of engagement at the end of the 14-day ultimatum.

“We are giving the federal government 14 days to make a specific statement on these roads. After 14 days if we didn’t hear from them, we would move to the next phase.”

During the protest, some of the lawyers were seen with placards carrying the inscription; ‘FG, Where Are The Billions Budgeted For Our Roads #FixOurRoads’