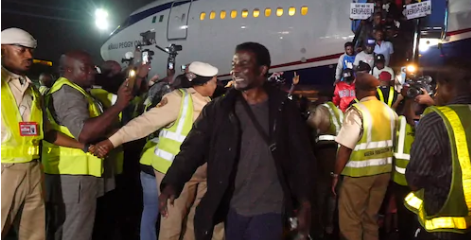 The second batch includes not less than 319 Nigerians who are expected to arrive Nigeria on Wednesday, September 18. This was confirmed to a Legit.ng reporter by an aide to the chairman of Nigerians in diaspora commission, Honourable Abike Dabiri-Erewa. Recall that Legit.ng reported that the chief executive officer of Air Peace Airline, Allen Onyeama, had explained why the company was offering free service in the evacuation of Nigerians in the wake of xenophobic attacks in South Africa. Onyema told journalists on Tuesday, September 17 that there was no personal motive in extending a helping hand as the gesture was only for the good of the Nigerian people.

“The motivation here is the fact that I want to see Nigeria respected as a nation. It is unfortunate that a lot of people didn’t know who Allen Onyeama is; it’s not the first time I’ve been doing things like that,” he said. Meanwhile, Legit.ng reported that Onyema had been nominated for a national honour by the House of Representatives for evacuating Nigerians stranded in South Africa at no cost. The recommendation was given when Onyema appeared before the House during Wednesday, September 18, plenary session. Legit.ng gathered that the lawmakers also resolved to make Air Peace their main carrier.