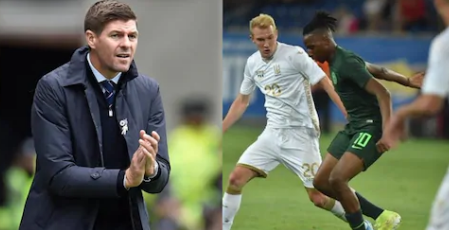 oe Aribo has been praised by his Glasgow Rangers manager Steven Gerrard after making a dream debut in the Super Eagles friendly against Ukraine. The 23-year-old opened the scoring in the third minute against eastern Europeans and also showed his box-to-box abilities in the 2-2 draw in Dnipro. Speaking at a pre-conference ahead of Rangers’ clash with Livingston in the Scottish Premier League, Gerrard said Aribo justified his called up as a result of his consistency in his team.

🎥 Gerrard: "Congratulations to him, his first game and he manages to get a goal. He was rewarded for his form as a Rangers player".

“Yea, I just spoke to Joe today, he was on a recovery day today, smiling away. Congratulations to him, you know his first game, he manages to get a goal, and he was rewarded for his form as a Rangers player.

“You know it’s his first call-up, so it shows you that he’s at the right place, and he’s playing football at the right level, you know European football, playing in Old Firms, at last, he’s being recognised as an international player.” “And now he’s rewarded with his first game and gets his first goal, so he should be in a great place,” the Champions winner added.

The Liverpool legend was asked if he thinks, Joe made the wrong move to Rangers from Charlton Athletic in the summer, he said; “Joe is in the right place, trust me.”